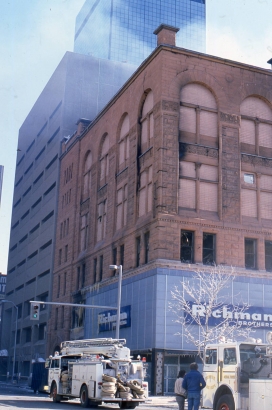 At one point the fire was so bad that it threatened to jump to the nearby Kittredge building. Firefighters saved that building by spraying it with water. Firefighters were hampered in their efforts to fight the Masonic building fire because of the design of the mall itself. "It was a tremendous problem," said Fire Chief Myrie Wise, referring to having to move the fire trucks from one side of the 16th Street Mall's roadway to the other because firemen feared the building would collapse on them. Firefighters had to cut down several trees to make way for ladders (Rocky Mountain News, March 4, 1984). The fire shot up hundreds of feet as it burst through the roof, which promptly collapsed at around 10:30 at night. Because of the fire, much of downtown was enveloped in white smoke and haze. While this was one of the largest fires in the city's history, encompassing a quarter of a city block and seven stories into the air, it still was not as big and financially devastating as the University Hills Mall fire on Thanksgiving eve, 1983.

One week before the fire, two Denver developers announced plans for a $6 million renovation of the vintage 1890s building. Renovation had begun, and what was left was mainly wood, which fed the fire. There were no injuries of any occupants of the building as it was largely empty that Saturday evening; however, 11 firefighters were injured. At the time, the source of the fire was unknown. 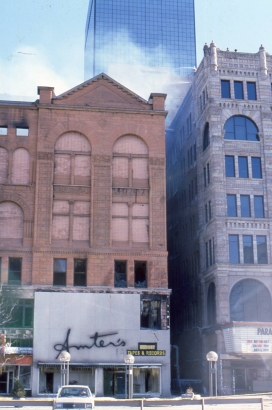 Later, as the investigation of the fire commenced, Walter Garcia, owner of Jerry Breen Florists, located on the ground floor of the building, was charged with first degree arson. He was later tried and convicted to 16 years in prison. Denver Fire Captain James Persichitti stated that there were two possible motives. One was revenge for the problems that the developers, Cambridge Development, had been giving Garcia in regard to his lease, and a financial motive, to collect on the insurance. The fire was started with gasoline inside the rear of the flower shop. Two other fires were started in other parts of the building, but did little damage before burning out (Rocky Mountain News, July 10, 1985). 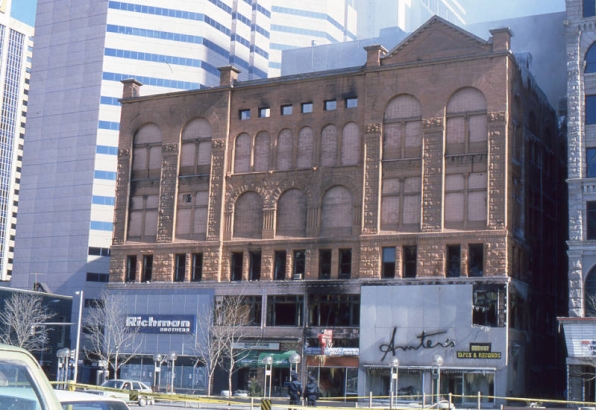 If you find history interesting, come on down to the Western History and Genealogy Department and check out all of our wonderful resources. Our Rocky Mountain Digital Collection is a great source for images, and if you like these types of articles, make sure you like us on Facebook!

Remarkable they managed to salvage this. It and the Kittredge Building are two of the most interesting features of 16th Street.

As far as fires in historic buildings, there are some photos of the fire that destroyed Colorado Constitution Hall (1977) in the collection I donated to Western History. You might find them interesting. The catalog number is C Photo Collection 478.

You should contact Retired Chief James Persichitti and see if he can add a few more facts.
If you need help, I can get you in touch with him.

Thanks for your comment Jim! I'll have to check out the photos, and perhaps that will lead me to another fire blog!

I remember coming downtown the morning after the fire to see the devastation. I particularly remember the awful smell, combined with the fear that the building would have to come down. Kudos to Cambridge Development Company for saving the exterior walls and building a new structure inside them.

Mark, thank you for your comment and I'm glad you enjoyed the blog. Yes, it is great that the building was saved and it houses some great businesses and offices.

There's a lot more to the story. Chief Wise and the firefighters thought bringing the building down would be safer and faster. Other Denver officials with historical preservation in mind thought otherwise. The story of intervention by senior officials in Public Works ought to be told.

Tom, this is interesting information. Is there a source that would give more information about Chief Wise and his thought to bring down the building, and how the officials in Public Works thwarted this?

In response to Tom Briggs comments about some who thought the entire building was going to be demolished and not renovated: I was the very recent new hire (hired to manage the renovation of the interiors) by Cambridge Development Group (CDG) when the fire occurred. That Sunday morning I was on the roof of the Kittredge Bldg with the senior city officials looking into the smoldering hole, while Alan Gerstenberger, CDG partner, was on the other side of the roof. The senior officials, including Emil Gadden (?) of the building department and someone from the Fire Department were discussing demolition. I had no idea what Alan's desire was. I went to Alan and said, "They are discussing total demolition." Alan said, "You tell them we are renovating this building." I went right over and conveyed the message. From that point on the Fire Department and the Building Department were incredibly cooperative and worked with us to save the building. What continued from that point was the most intensive six weeks of my entire career.

Wow Jill, that is incredible! We have Alan and you, plus others, to thank for saving this building. It is amazing that you read my blog and now we have more information about why and how the building was saved. I am also happy that the city cooperated. Thank you so much for telling us your story. Through these blogs and comments, we learn more about this wonderful city and continue to keep stories and information about various events such as this, in public view. Thanks again Jill.