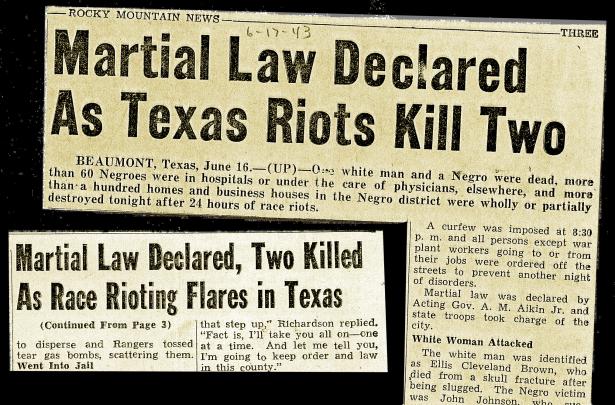 In World War II, Beaumont, Texas had become an industrial boom town, with its factories and shipyards busily engaged in providing for the U.S. Military in its battle against Hitler and Japan. In 1942 and 1943, almost 20,000 people moved into town, and the infrastructure needed to enforce the Jim Crow [segregation] laws wasn't up to the task, deeply irritating those who felt the need to keep certain people "in their place."
In June, 1943, segregated commuter buses were established to stop the racial violence that had been plaguing mixed transportation. Citywide food shortages, also arising from the sudden population surge, added to the toxic brew.
Competition for jobs was fierce, and brought racial tensions into sharp relief. To make matters even worse, the Beaumont chapter of the Ku Klux Klan was planning to host a regional KKK convention on June 29. They hoped to bring 15,000 to 20,000 Klansmen from all over the South, and the proposed meeting had received an enormous amount of media attention. At the same time, the black community was preparing to commemorate the freeing of the slaves in Texas for its annual Juneteenth celebration, on June 19, when hundreds of East Texas blacks were expected to come to Beaumont.
Against this backdrop, early that June, a local white woman claimed that a black man she had hired to work in her garden had broken into the house and raped her, though later she was unable to identify him from the suspects held at the City Jail.
Circulating among the crew at the Pennsylvania Shipyard, the story became a catalyst for a boiling rage, and finally, on June 15, 2,000 men walked off the job and marched in a fury to the Beaumont City Hall. Another 1,000 sympathetic townsfolk joined them along the way, and later, after the carnage, observers estimate the anarchic and leaderless mob at some 4,000 people.
The UP story from the Rocky Mountain News clipping in our collection says that the crowd
“ appeared at the courthouse, seeking the accused Negro. Authorities had permitted the men to see that the Negro was not there, but they were not satisfied.
Sheriff Bill Richardson stepped out of the door of the courthouse, which also houses the county jail, with a sub-machine gun on his arm.
'I'm damned tired of all this,' he shouted. 'You boys break it up now and go back to building ships like you should be doing.' Someone in the crowd shouted back an insult. 'Let the damned fool that said that step up,' Richardson replied. 'Fact is, I'll take you all on - one at a time. And let me tell you, I'm going to keep law and order in this county.' "
Rebuffed, the unsatisfied and angry mob dispersed into small bands and moved into the black section of Beaumont. With guns, axes, and hammers, they smashed and burned their way through black neighborhoods from downtown to the central and north part of Beaumont. Over a period of 24 hours, the rioters looted and burned black stores, restaurants, businesses, and over 100 homes.
That night, Mayor George Gary called in the Texas National Guard and acting governor A.M. Aiken Jr. declared Beaumont to be under martial law.  About 1,800 guardsmen entered Beaumont along with 100 state police and 75 Texas Rangers. Upon their arrival, at 8:30 p.m., a curfew was established, but by that time most of the madness had subsided.
The Texas Highway Patrol placed roadblocks around the city to seal it off against rural whites who threatened to join the mob. Mayor Gary closed all liquor stores, parks, and playgrounds to prevent the gathering of large crowds. Black workers were barred from going to work. The curfew was lifted the next day on June 16, and the guardsmen left town.
The Jefferson County Fairgrounds was turned into a stockade to accommodate the overflow of prisoners from the city and county jails. By June 20 a military tribunal had reviewed the cases of the 206 arrested. Twenty-nine were turned over to civil authorities on charges of assault and battery, unlawful assembly, and arson. The remainder were released, mostly because of lack of evidence. On June 20, Aikin ended the period of martial law. During the five day period 3 people were killed.
Beaumont then joined Detroit, New York, Los Angeles, Mobile, Philadelphia, Indianapolis, Baltimore, St. Louis, and Washington, D.C., as sites of bloody race riots in the summer of 1943, fully 20 years before the Civil Rights Riots of the 1960s.
It is an important distinction to note that these were not uprisings by an oppressed minority - these were in effect pogroms - attacks by the majority on a scapegoated target. Racism is projection - a defense mechanism in which one group unconsciously rejects their own unacceptable attributes by ascribing them to a different group that is perceived as "other." These little-noted and conveniently forgotten events are a crucial part of the story of Black Oppression in the United States, and remembering them adds deeper meaning to the catch-phrase "race riot."
In the face of this story, contemporary cries of "tyranny" ring hollow. Blanket condemnations of "government" ignore the vital importance of the authorities in containing a society that sometimes loses control of itself.
"Pray for the welfare of the government, for without respect for the government people would swallow each other alive" Talmud, Avot 3:2
The photos for this blog entry were found on the Internet and are not part of the Denver Public Library Collection.

Actually 21 people were killed, and not 3 as this article suggest. Also, there were no charges for any of the 21 deaths that occurred during this race riot.