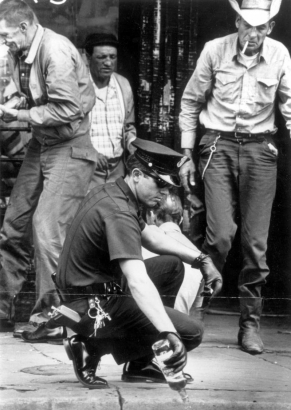 The city of Denver is now, and has always been, a work in progress. For proof of this point, you needn't look any further than the stretch of Larimer Street between 14th and 15th Streets.

This block has been a central player in Denver's downtown ever since there's been a Downtown Denver. Over the years, it's seen pioneers, miners, riots, skid row alcoholics by the hundreds, and lately, scores of well-heeled shoppers and diners.

But Larimer Street's best known days may have been its worst.

Right up until the mid-1960's, Larimer Street was home to dozens of dive bars and cheap motels known as flop houses. Larimer Street's grit and distinct lack of glamor is eloquently described in Neal Cassady's classic autobiography The First Third: And Other Writings, as well as other skid row histories such as as An Office on the Street: A Poignant Story of Survival and The Unattached Society: An Account of Life on Larimer Street Among Homeless Men.

Suffice to say, scenes like the one depicted in this picture were an everyday, probably every few minutes, scene on Larimer Street for a very long time.

By 1965, however, the City of Denver embraced an aggressive urban renewal strategy that was in vogue across the country. As part of that strategy, city planners were keen on knocking down the entire block and starting all over.

Fortunately for Denver, a preservation-minded developer named Dana Crawford stepped in and convinced urban renewal fans that, perhaps, something else could be done with Larimer Street. The result of her efforts is now known as Larimer Square and, within a few years, the Denver Police Department was spending a lot less time pouring rotgut into Larimer Street gutters.

Today, Larimer Square bears almost no reminders of rowdy past as a skid row as throngs of shoppers, diners and fun seekers crowd the street every weekend. (Of course that doesn't mean the problems of alcoholism, homeless, and mental illness are gone; they've just moved to different parts of the city.)

It's just another example of how change, whether we like it or not, maintains a constant presence in the city of Denver.

My dad Joseph Candelaria owned the Elbow Room Bar on the corner of 20th and Larimer, 1973 thru 1978. Skid Row back then.

There must have been some very interesting stories from that bar! Thanks for sharing that, Joey!

Jack Kerouac book of sketches, around page 133, dwells in descriptions of Larimer Street in the mid-1950s. Beautiful stuff!

Neal Cassady's letter from Juvenile Reform hangs framed on the back wall of My Brother's Bar by a photo of Neal & Jack K. Mortifyingly, as a child Neal lived in the Metropolitan Hotel at 227 16th st & in & out constantly of other flea bags in Larimer Square, as his Father couldn't maintain any semblance of constancy for his boy due to Dad's glaring personality disorder/s. Poor kid. Let's all work to not just put a shiney sanitary face on the non living things there but to really open our hearts to the ways in which we can shine & sanitize society as well. Read Martin Luther King's "Where Do We Go From Here? Chaos or Community?" For the way in which we can begin to prevent such personality disorders & all manor or social ills. Read more to learn about how & why we suffer from such things & above all: Visit all neighborhoods of Denver, they all have so much to offer anyone lucky enough to land there!

Hello Brian, just now reading Neal Cassady's Collected Letters, 1944--1967 & there's a letter from Neal's father. There's two "care of" signed addresses, one on Market Street & the other Za Za Barber's Shop on Larimer Street. Thought you might like to know.