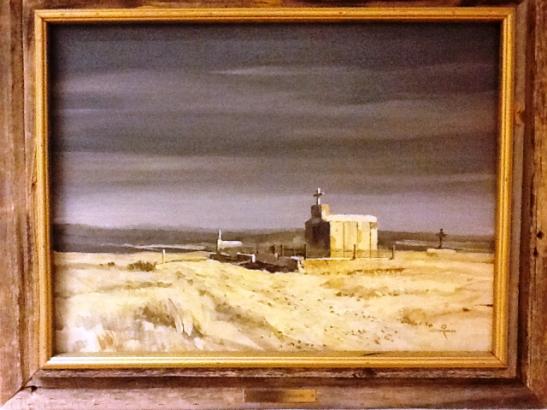 With the restored Graves of Aguilar

In 1964, Otto Kuhler dedicated a series of twelve paintings to “the broken bodies still lying under the barren hills” of what had been Southeastern Colorado’s mining country. WHG is pleased to announce that the painting The Graves of Aguilar has been restored and returned to permanent display alongside the rest of Kuhler’s series, thanks to a generous donation by Charles Albi. Kuhler was a successful engineer from Germany who designed railroads, steam locomotives, diesel trains and more. Yet Kuhler had always drawn and painted too, and when he saw the end of the Industrial age approaching, he devoted himself to documenting this vanishing era. He moved from New York to a run-down ranch near Bailey, Colorado, where the vast open country inspired him. He discovered Trinidad and Raton Pass, and his paintings explored both the grand scale of this region’s industrial past and the ruins that existed where there had been progress. His scenes are of eerie and beautiful decay set in stark and unforgiving natural landscapes, of coke ovens and working mines belching smoke that obscures the hills, and of old mine towns and graves dissolving back to nature. Though only one painting in the series contains human beings, paintings such as The Iron Witnesses (a mining family’s camp in the aftermath of a fire set by guards during the Ludlow Massacre) scream humanity. Come to the Fifth Floor of the Denver Public Library to view these historic, haunting and impressive paintings, and to view the many other works of art in our collection. For more information on the paintings in Otto Kuhler's Land of Lost Souls series, search our catalog.