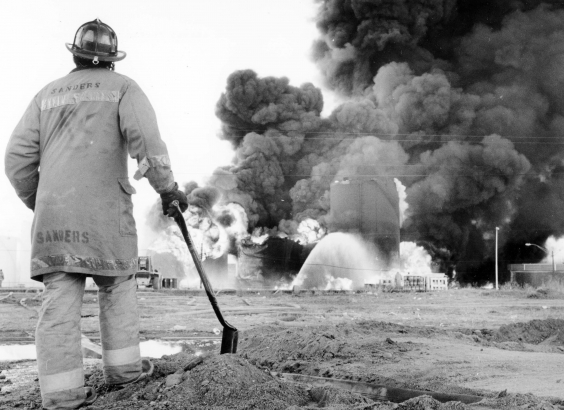 This inflammatory headline, from the Denver Post, November 26, 1990, greeted readers that day. Two million gallons of jet fuel blazed away and threatened to engulf 12 million more gallons of fuel at a depot just north of the airport tower at Stapleton International Airport. The fire started at 9:20 a.m. on November 25 and spewed smoke that was visible for miles. The heat from the fire ruptured a 400,000 gallon tank, then spread to a holding pond and a second large tank. Later that night, another 800,000 gallon tank ruptured and fed the fire, and other larger tanks were threatened. Winds hampered firefighting efforts as well. This all was happening on the busiest air traffic day of the year, because of the Thanksgiving holiday.

Federal aviation inspectors had given the fuel farm a clean bill of health during an inspection in July of 1990, but Denver fire inspectors had found in their yearly checks that fuel valves were located too close to the holding tanks, not to mention past spotty inspections and insufficient equipment. Then Denver Mayor, Federico Pena, promised to check records to see whether city inspectors ever asked for the valves to be moved. If the valves had not been so close to the tanks, firefighters might have been able to shut them off, blocking the supply of fuel.

The fire did not impair visibility for pilots, but it did block the flow of fuel to the terminals, especially for United Airlines, which was forced to ferry fuel from other locations. To keep United's flight schedule intact, it sent departing flights with just enough fuel to reach nearby cities such as Salt Lake City, Colorado Springs and Cheyenne, where they took on more fuel. United also bought fuel from Continental Airlines and the U.S. Air Force. All this caused flight delays and cancellations. Even Hollywood stars felt the heat, as actors Kurt Russell and Goldie Hawn experienced delayed flights. Non-stop flights became one-stops for refueling needs. Pay phones became hot commodities, as smart phones had not yet arrived and cell phones were still few and far between.

Mid-evening attempts to halt the fire with chemical foam failed and officials agreed to let the fire burn until fuel levels were low enough for another try. Concern was expressed as one tank after another was threatened. "RED 2, PULL BACK" came the terse call over a fire department radio as the first of the 800,000 gallon tanks went up (Denver Post, November 26, 1990). Over 600 firefighters fought the blaze, in which flames rose to 500 feet at temperatures of 3,500 degrees. Luckily there were no major injuries, though firefighters were treated for heat exhaustion. As temperatures cooled throughout the night, it eventually became easier to fight the fire. On November 27, just as officials boasted that they had the upper hand, winds from a cold front sent flames flying in unpredictable directions and onlookers running for cover from the intensity of the heat.

After the fire raged out of control for over 52 hours, fuel tank fire experts from Texas extinguished the fire in a 30 minute blizzard of foam. After Continental Airlines offered to provide help at no cost, a five man crew from Williams, Boots & Coots provided a blanket of white foam and chemicals which smothered the blaze. It had become apparent to all, including the fire department, that outside help was needed, and letting the fire burn out on its own continued to endanger adjacent fuel tanks. All in all, $3 million worth of fuel burned, not to mention estimated cost to the city ($100,000-$500,000 in overtime, equipment and foam), and the cost to the airlines, especially United, to buy fuel from the nearby Conoco refinery for as long as it took to rebuild the tank farm.

And what was the eventual cause of this "monster" fire? Four bolts that failed to hold a pump engine in place in front of two tanks of jet fuel. Denver fire chief Richard Gonzales said the bolts sheared, causing the engine to misalign with the pump and spraying fuel into a damaged engine coupler. Friction heat from the coupler ignited the fuel. Gonzales said, "The fuel was under pressure and then became atomized. As the fire progressed, it became it's own worst enemy." (Rocky Mountain News, April 30, 1991) The smoke from the blaze was seen as far away as Boulder and is remembered by many who lived in Denver as well as those who flew through. As terrifying as the fire was, it was lucky that no one was hurt and that the new Denver International Airport opened a little over four years later. 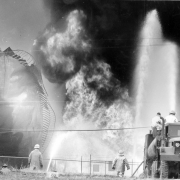 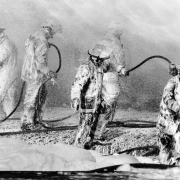 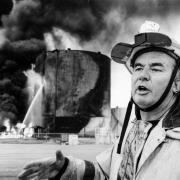 Fascinating story! It happened before we moved to Colorado.

I'm glad you enjoyed it. I learned a lot writing the article. I was here in Denver during that time, but it was so long ago, I completely forgot about the fire.

I was a senior in my last semester at the University of Colorado at Boulder. That Sunday (November 25th), my father, who was an airline pilot, and I arrived at Stapleton sometime in the early to mid-afternoon. We had been out in Los Angeles for the Thanksgiving and were returning home at the end of the weekend.The fire was directly observable from the concourse once we had gotten off the plane, and I remember standing there and just watching it rage for a few minutes.

Thanks for sharing your memories of the fire Peter. I was actually working for United Airlines at the time and also remember seeing the flames from the terminal. Hopefully this will never happen at DIA.

I worked as a mechanic at Continental Airlines when this occurred. Memories certainly get fuzzy after 40 years, but there are some very incorrect details in this story. But anyway, it was a very large fire, and the heat could be felt from far away. I lived 35 miles north of town then, and the smoke could be seen very clearly.

I think the most impressive thing was watching those Texans walk into the fire like it was nothing.

Thanks for reading the blog post Dean. I researched the blog post by using the Denver Post and Rocky Mountain News archives. What are the incorrect details that can be corroborated?
James