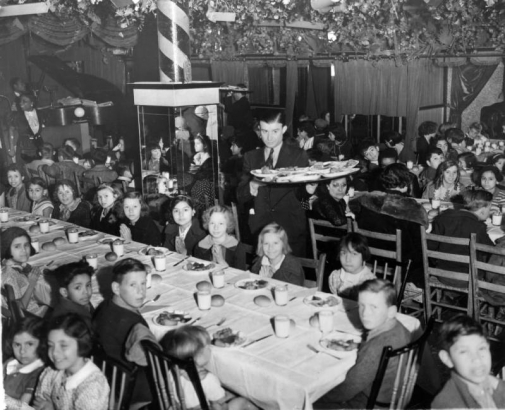 November 25, 1936, had plenty of potential as a pretty lousy Thanksgiving Day. After all, the Great Depression was seven years in and lots of people just didn't have the means to provide turkey and trimmings for their families.

Fortunately, for the children of Denver anyway, the big-hearted owners of a nightclub called the Tivoli Terrace (1900 W. 32nd Ave) stepped in and provided Thanksgiving dinner for more  than 2,000 of the city's neediest children.

The event was promoted by the Denver Post and was brainchild of Ida L. Gregory. Gregory was a social reformer who lived in Denver and worked as an assistant to Judge Ben Lindsey and as the Chief Probation Officer for the City of Denver. In the early part of the 20th century, Gregory also ran a free night school for Denver's neediest citizens (similar in spirit, if not scope, to what would become the Emily Griffith Opportunity School).

An account of the dinner that appeared in the Denver Post the next day under the headline, "Happy Youngsters Filled With Turkey And All The Trimmings," described a joyous event that overwhelmed the Depression-weary children saying:

A trifle awed at first by their unaccustomed surroundings, the children soon thawed out under the influence of food. Their eyes gleamed, they shouted and cheered, and how they ate!

The happy event was, it seemed, a city-wide effort that included free bus and trolley service to the club from the Denver Tramway Company.

According to the Post, this was not the first time the event had been held, though there's no indication as to when it actually ended.

We do know that the children enjoyed their meals and the opportunity to step away from the dreariness of the Depression, even if it was for just an afternoon or, as the Post said, "And when it was all over they voted it the best Thanksgiving dinner yet!"

Amazing times, for sure--thanks for sharing a bit of Denver's history with us, Brian :-) By the way, that photo is a far cry from the one you would take today at the Rescue Mission...much younger, happier crowd back then (even during the hard times of the Great Depresssion); sure makes you wonder about the hard times of today