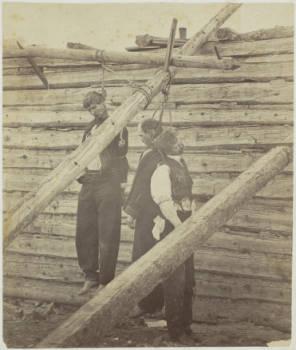 Today’s revisionist historians would have you believe that the West was not as wild and wooly as originally thought and was a relatively tame place. Compared to Hollywood’s version of high noon shootouts, horse chases, and action packed train robberies one might think they have a point. But in reality, the truth lies somewhere in between. It is true that most people living in the West went about their lives as mundanely as people of today. Daily chores, farming on the homestead, and trying to bring the crop in before harsh weather struck consumed ordinary citizens lives. But there are many heavily documented cases throughout the history of the Old West where disputes were settled with the hot lead of a six-shooter and where justice was doled out at the unforgiving end of a hangman’s noose. In truth, Wyatt Earp’s Vendetta Ride really did happen. Former United States President, and all around tough guy, Teddy Roosevelt actually tracked down and captured a group of horse thieves who stole a rowboat from his ranch. And vigilante mobs often took to stretching necks of known bad men when the wheels of justice turned too slowly for their liking. Take the time to search through the Western History Department’s digital colections and see for yourself the images of Frontier Justice that gripped the West and sent many a suspected villain, road agent, and outlaw to his final reward.

Could you add a bit of history to the above photo. Perhaps explain the crime these three men committed, etc... Thank you, Jeff jeffreym@gordonstate.edu
Hi Jeff, Thanks for your question. The photo used in this blog is of Big Ned Wilson, Asa Moore, and Con Wagner, described as "outlaws hung at Laramie by vigilantes" in 1868. This image is part of a photo album by Arundel C. Hall. You can find this image and more information in our digital collection here: http://cdm16079.contentdm.oclc.org/cdm/ref/collection/p15330coll22/id/70455.