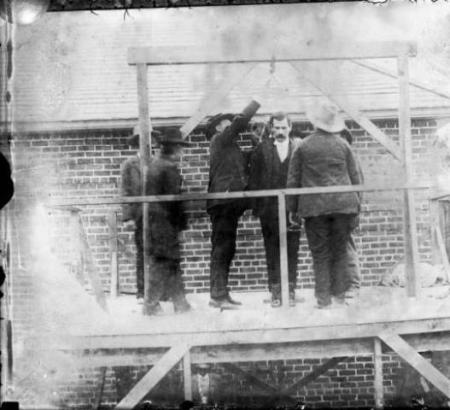 Another dose of Vigilante Justice...

Pictures are said to speak a thousand words and these photographs show us that real history is not as watered down and sugar coated as most believe. In a time when many frontier towns suffered from a short supply of law and order, sometimes ordinary  citizens took it upon themselves to dish out a brutal brand of justice in the Old West.

Often times when suspected murderers, horse thieves, and road agents were captured and brought to a civilized trial justice was never served. Many of these fiends evaded paying for their crimes by sandbagging the court system with friends and companions who would lie on their behalf and provide them with alibis. Without proof of any wrong doing, criminals were released and allowed to freely walk the streets. That is when vigilance committees would step in. These committees were made up of groups of volunteer citizens that would assume authority and punish those suspected of being criminals or offenders. And often times, the punishment was swift and unforgiving.

To see more photos search through the Western History Departments digital collections and see just how wild and wooly the West could sometimes be.