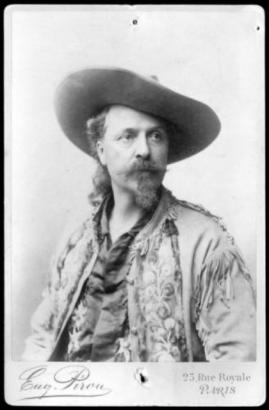 Who’s the most famous American that ever lived? Today people might say Abraham Lincoln or perhaps George Washington. There was a time, however, when the name Buffalo Bill Cody was the first that came to everyone’s mind. Born in Le Claire, Iowa in 1846, William Frederick Cody was the son of an abolitionist and grew up on a farm. As Cody grew into a man, he would hold several jobs. He worked as a workman on a freight carrier, a scout, a rider for the Pony Express, a buffalo hunter for the railroad (that earned him the nickname Buffalo Bill) and he eventually served during the Indian Wars. During his time serving as a civilian scout with the military, young William Cody received the Medal of Honor for riding with the U.S. 3rd Cavalry Regiment.

After his civilian-military service ended in 1872, Cody began acting in plays produced by dime novelist Ned Buntline. After acting for a time, Cody went to his ranch in North Platte Nebraska and began to develop his idea for what would become one of the country’s most iconic enterprises: “Buffalo Bill’s Wild West.” Cody’s Wild West became a form of entertainment that few had ever experienced with trick shooting, Indian raids, wagon trains, and display’s of horsemanship it was an amazing spectacle for the viewers. Buffalo Bill traveled the world with his Wild West and entertained millions. He was recognized by foreign royalty and became America’s most famous son.

Buffalo Bill was also a man ahead of his time too, he was an advocate of equal pay for women, hired people of all ethnicities, and was considered a friend and respected by the great Sioux Chief Sitting Bull. When Thomas Edison captured some of the first motion pictures ever he used Buffalo Bill and his Wild West as his subject. Bill’s show was also the inspiration for some of the earliest and most successful western films.