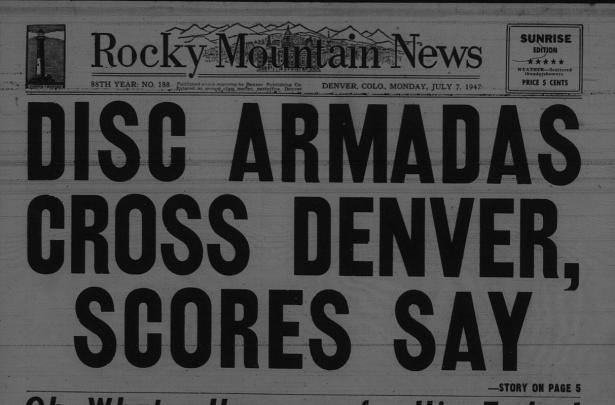 On July 6, 1947, people from all around the Denver area reported seeing flying saucers in the sky, moving at incredible speeds and making impossibly sudden and exact turns. The Rocky Mountain News reported these sightings as front page news with the headline, “Disc Armadas Cross Denver Scores Say.” A sailor at Buckley Field Naval Air Station reported a UFO “going like a bat outta hell.” Two distraught children in Idaho Springs heard “thunder” and ran screaming to their mother that they’d seen a flying disc. Some people reported that the UFOs were soundless. Some said they made a booming noise. One man even reported a UFO with an American flag on it. One scientist put these sightings down to the mirage-like affects of clouds. A psychiatrist chalked them up to mass hysteria brought on by fear and insecurity “about the possibility of ‘Buck Rogers’ atomic warfare.” During the height of the world’s UFO obsession, Carl Jung opined that in a world where a traditional God was losing meaning, humans unconsciously invented UFOs out of a need to feel that some higher power was still in control. Was this truly the product of a mass hallucination, brought on by the terrible specter of a nuclear age in which the world could be destroyed at the touch of a button and control over ultimate destiny had passed from the common man’s hands? Even a casual search in our Western History Subject Index reveals many newspaper headlines concerning UFOs dating back to the 19th Century, with titles like: “Colorado’s UFO of 1881” and “…People from Oregon believed to have come to…Fruita…to await a UFO which would take them to another planet” (OK, so this one wasn’t a sighting, but it was too funny not to share). Then there’s the Greeley farmer who reported seeing a UFO with flight problems heading south on the same night as the Roswell Incident. Or how about the Indian hunting parties in the San Luis Valley (still a hotbed of UFO sightings) that were “disappeared” by the flaming balls in the sky that Indians saw before the arrival of settlers (these two stories appear in the book Haunted Colorado). Our department even has the Final Report of the Scientific Study of Unidentified Flying Objects, the famous Condon committee study that debunked UFOs, sponsored by the US Air Force and carried out at CU Boulder. Whether or not you believe in UFOs or are undecided, you will find plenty of information about this strange phenomenon here in Western History and Genealogy. For information on the UFO watchtower photograph, click here.

I was 10 years and living at 7001 Richthofen Pl. in Denver. Our family had just returned from a drive in movie. As we parked our car we noticed three large Saucers flying in a triangle formation parallel to Olive st, at about 200ft they made NO NOISE. We went to the east of our home and saw them flyaway at the same altitude in easterly direction. Lowery Airforce base was just North on us. The next day we checked our local paper "The Rocky Mountain NEWS" had pictures Taken by two men of that sighting also. Very vivid memories of that evening. Two men had a flat tire and took pictures of these saucers as they noticed them too.