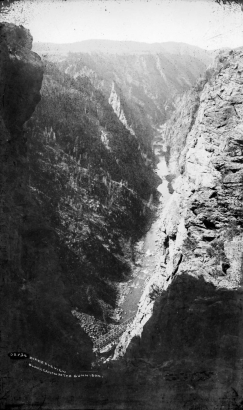 Another railroad blog by esteemed railroad historian Steve Patterson! And make sure you check out our Denver & Rio Grande Western Railroad collection and our Railroads of the American West research page.

With the opening of the 38-mile "Dotsero Cutoff" in 1934 linking David Moffat's Denver & Salt Lake Railroad with William Palmer's Denver & Rio Grande Western Railroad in Eagle County, that reduced, what was then, the rail mileage between Denver and Salt Lake City via Pueblo by 175 miles. But the original D&RG mainline between those cities was 735 miles and required 35 hours of travel. Today, Amtrak traverses the 570 miles of "The Mainline Through The Rockies" in 15 hours.

"The Denver & Rio Grande Railroad begins at Denver and runs over, under, through, beside, among and between vast quantities of high-grade scenery on its way to Salt Lake City.

Scenery is the D&RG's specialty. It hauls more people who haven't anywhere in particular to go than any other railroad. Each year thousands of Americans and Europeans travel over the road from Denver to Salt Lake City, and then turn around and come back in order sit on the other side of the car and get another eyeful of the grandeurs of Nature.

The D&RG begins a mile above sea level and never gets much lower. It starts for Salt Lake City by going 100 miles almost directly away from it, and consumes 750 miles in traveling about 350 miles as the crow flies -- if he was a well-fed crow and not subject to dizziness -- but none of the passengers mind this. It is too much fun to poke one's head out of the car window on a heavy curve and converse with the fireman as the engine comes past.

The D&RG climbs mountains two miles high, wriggles through canons so narrow that only one coat of paint can be put on the cars, and crosses rivers which look like the Niagara rapids in hysterics. Over 750 miles of its lines are narrow gauge, and the scenery is a tight fit for them at that. It takes three locomotives to hoist a passenger train over the great Marshall Pass, and if there are more than three fat men on the train, the firemen get time-and-a-half.

The D&RG operates over 2,500 miles of railroad, much of which was built with the aid of parachutes and rope ladders."

I liked your description, ... wriggles through canons so narrow that only one coat of paint can be put on the cars. That statement really paints a vivid picture in my mind. Thanks for the history lesson.

We're glad you enjoyed the post. We have more coming from Steve, so stayed tuned!

Nice piece Steve, liked your humor in this, especially the part about going over Marshall Pass and the three fat guys!

I think people missed the quotes. :) Maybe italics should've been used. Vivid and funny descriptions by Fitch. Nice find. Amazing feat getting through the mountains with the railroad.

I think your suggestion on quotes may have helped. We're glad you enjoyed the post!

Fitch was definitely using some creative license when he was talking about the Rio Grande, but just enough truth is mixed in to make it believeable. The last section about men using ropes and parachutes to dig a railroad grade is half-correct. Parachutes were not very common in 1881 when the San Juan extension's high line over the Animas River was blasted out of the rocky cliffs. Nonetheless, the men must have had nerves of steel to manage such work with what passed for rope back then!

I read his blog, great content I stumbled upon, I have read something about one of his topics on https://www.trainconductorhq.com in the past, keep it up

My email address is vicky_cackler@yahoo.com Thanks