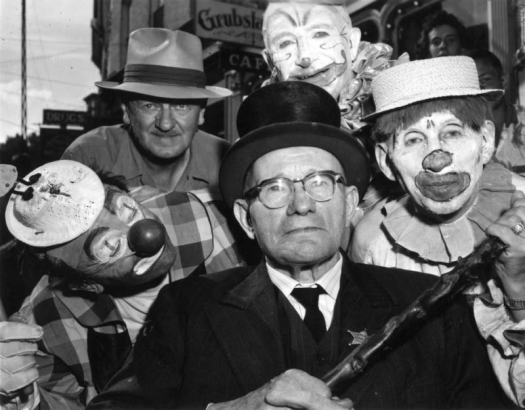 Clowns. You either love them or you just can’t stand them. For most folks, there isn’t much in the way of middle ground.

But the man in the center of this picture seems strangely at ease whilst surrounded by a gaggle of clowns and a scary looking carnie-type. Does he know something the rest of us don't or is the calm demeanor enhanced by the fact that he’s carrying a large stick? We'll never know.

Here's what we do know. This particular picture was taken sometime in 1950 on Main Street in Central City, Colorado, most likely as part of some sort of festival or circus - though no further details are provided.

We also know that while it's easy to mock old pictures of sketchy looking clowns, we should also take it easy on the people who actually go out and perform as clowns. Amongst both professional and amateur, their reputation for inducing terror stands in stark contrast to the good works that legions of the entertainers have performed over the years. Clowns working for service groups such as the Shriners and the Lions Club have performed all manner of charitable works for decades.

So can anyone with a current clown phobia take a step back and re-evaluate their view on clowns? Maybe, but it might take a group of less scary looking clowns to really get the ball rolling!

The clown on the left looks a little like Blinky. Could it be?

Believe it or not, I think that particular clown would be a shade to old to be Blinky, but the resemblance is certainly there.