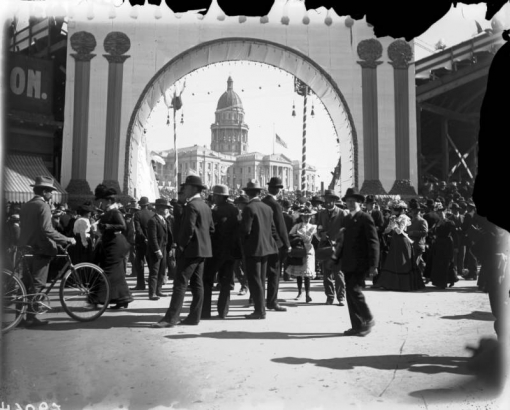 The Taste of Colorado is a massive event that draws more than half a million visitors to Civic Center Park to stuff their faces on local fare while grooving to the sounds of classic rock. But did you know that the first Taste, known as the Festival of Mountain and Plain, was a desperate effort to rev up Colorado's fortunes in the wake of the silver crash that wreaked havoc on the young state?

By the time the folks pictured above gathered at the corner of Colfax and Broadway for the festival's signature parade, Colorado was two years into an economic depression that devastated the silver mining industry, with broad repercussions for just about every business in the state. The culprit behind the crash was a rapid decline in silver prices that began when the U.S. Government pegged its currency to the gold standard.

In the wake of the silver crash, Denver was inundated by newly-unemployed miners and their families. These economic refugees strained city services and added to a general air of malaise that enveloped the city. But in 1895, civic leaders had an idea they thought might help the situation; they wanted to stage a festival, the Festival of Mountain and Plain.

The Festival of Mountain and Plain featured no fewer than four separate parades, a masquerade ball at the Brown Palace, and another ball on the streets of Denver. For the next four years, the Festival was an integral part of the Denver social scene, but by 1902 it had run its course. Though there was an attempt to revive the Festival in 1912, it remained a mere memory for the next seventy or so years.

In 1983, the Downtown Denver Partnership revived the Festival in an effort to promote the newly-opened 16th Street Mall. The new Taste of Colorado took its cues from the Taste of Chicago and placed an emphasis on eating ahead of parades and civic events. Since then, it's been a Labor Day tradition that just keeps growing and truly marks the end of summer in the Mile-High City.

So when you're strolling through the intersection of Colfax and Broadway with turkey leg in hand, think back to 1895 Festival of Mountain and Plain that started it all.

Would you like a copy of this picture for your home or business? High quality prints of this, and every other photo in our collection, are available at very reasonable prices.