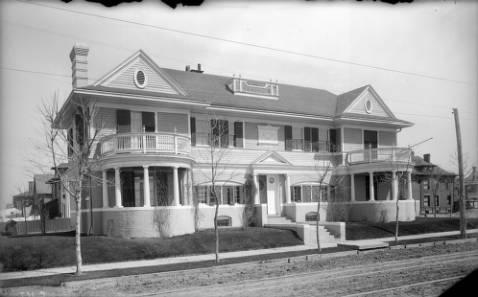 In The Spirit of Halloween, Ghostly Tales from a Cheesman Park Residence

The 1980 film The Changeling is based on the paranormal events Russell Hunter experienced while living in an old home near Cheesman Park in the late 1960s.

Hunter had worked as a musical arranger for CBS-TV in New York City, but moved to Colorado in the mid-1960s to help his parents manage the Three Birches Lodge in Boulder. In the late 1960s, Hunter began looking for an apartment in Denver where he could live and work on his music. He rented a home at 1739 East 13th Avenue (which has since been torn down).

Hunter claimed that beginning on February 9, 1969, he started experiencing strange phenomenon in the house. First there was the “unbelievable banging and crashing” that occurred every morning at 6 a.m. (and stopped as soon as Hunter’s feet would touch the floor). Then, faucets began to turn on by themselves and doors opened and closed on their own. Walls vibrated violently, tossing paintings to the floor.

Shortly thereafter, Hunter and an architect friend uncovered a hidden staircase in the back of a closet. The stairway led to the third floor of the home where Hunter found a child’s trunk containing “a nine-year-old’s schoolbooks and journal from a century ago.” The journal detailed the life of a disabled boy who was kept in isolation. The boy wrote about his favorite toy, a red rubber ball. A few nights after discovering the trunk, a red rubber ball dropped from the top of a spiral staircase in the home.

Hunter claimed that a séance revealed the story of a sickly child who was heir to a fortune from his maternal grandfather. When the child became gravely ill, his parents worried that the boy’s inheritance would pass to a different branch of the family. When their son died, the couple secretly buried him in a field in southeast Denver and adopted a boy from a local orphanage who perfectly resembled their deceased son. They trained him to take on the identity of the deceased boy (hence, the “changeling” film title) and the boy went on to become well-educated and successful.

Hunter declared that it was the deceased child who spoke through him at the séance, revealing directions to his burial place under a house on South Dahlia Street. Hunter stated that after gaining permission to dig under that home, human remains and a gold medallion inscribed with the deceased boy’s name were found in the grave. A few days later, Hunter stated that he began to experience more violent ghostly activity in his home. He said, “glass doors blew up in my face and severed an artery in my wrist. The inner walls over the head of my bed violently imploded.”

Hunter left the house and only returned to it again to watch its demolition make way for a high-rise apartment building. He remarked of the razing, “As the walls of the wing which had contained my bedroom collapsed, they suddenly flew outward and crushed to death the man operating the bulldozer.”

As Phil Goodstein points out in his 1996 book The Ghosts of Denver: Capitol Hill, the historical details in Hunter’s story don’t exactly check out.

What can historical records tell us about the house and people that inspired the The Changeling? Next Wednesday, we’ll consult resources readily available in the Western History & Genealogy Department to fact check this frightening ghost story!