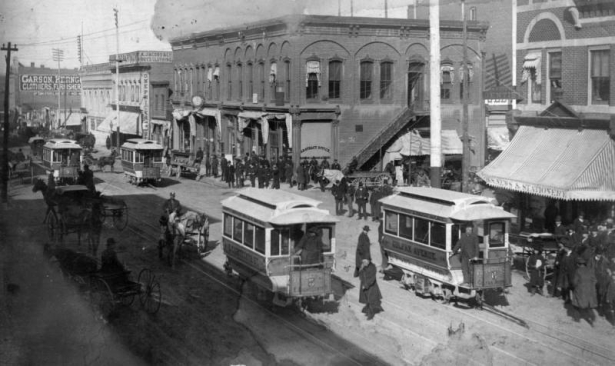 Denver's RTD will soon have 122 miles of commuter and light rail trains when its voter-approved FasTracks is built out, the city having come full circle since its beginning.

The first carriage on steel wheels was horse-drawn on Dec. 17, 1871, as the Denver Horse Railroad Co. The following year its name was changed to Denver City Railway Co. because mules were also being used with the horses, and by 1874 there were 8 miles of rail lines. Cable cars were introduced in 1888, and the 65,000-ft. cable car run on Welton St. was the longest in the world. All of the street rail transportation was consolidated in 1899 to become the Denver Tramway Company. Cable cars were phased out in 1900 after spending $5 million to convert to electric street cars. The Tramway's line on Colfax Ave. was the longest in the country.

All street cars were retired by June 3, 1950. Denver Tramway Co. became Denver Metro Transit in 1971, and in July 1974 DMT became part of RTD.  As Denver welcomes RTD's new trains, a tiny glimpse into the Tramway's history nearly a century ago reveals it wasn't always smooth running. The following Bulletin was issued to new employees in September 1920:

Denver has always ranked among the very highest in the facilities, the service and the personnel of its Street Railway System.

It excells most other cities in having greater track mileage in proportion to its population.

Its car service was reliable, speedy, and up to a year and a half ago, was adequate and ample, averaging then more seats for traffic than any other large city.

Its trainmen were known as the most capable, the most courteous of car service employees. Its accident record was among the lowest of all.

Its operations were conducted efficiently and, all things considered, at the lowest expense, measured by the cost per car per mile.

The Tramway is just emerging from a great crisis in its affairs.  Many of this fine group of former employees were misled into a strike and deceived into the loss of their jobs by evil or ignorant advisers.

And now -- the people of Denver are looking to you, the new Tramway employees, and to the Tramway officials, for a complete, early restoration of the service to the former high standard.

The Tramway management believes that not only will this be attained, but by your earnest, loyal efforts, and with your hearty co-operation, this former high standard will be surpassed.  It can be done!

Always enjoy a bit of history and whimsy from Mr. Patterson!

A great article of how the area's future is a reflection of its past. Well done!

Trying to keep the fare low, compete with the automobile and pay employees a fair wage was the gottacha of many systems. In Michigan the trolleys had to pay for road upkeep while the automobile was using more and more of the road. The trolley companies were subsidising building roads for the the automobiles. Finally the cost to repairs roads was taken over by the counties, but not before ttolley companies ran into ran into financial troubles.

What in the World is Vinegar Pie: Recreating a Historic Recipe
Print Your Own Money: The Story of the First Denver Mint
The Owl Club of Denver
DPL: A 'Chief Interest in People and Books' for 130 Years
Who was the first baby born in Denver? The answer depends on how you ask
Ice Houses: How Early Denver Kept Its Cool