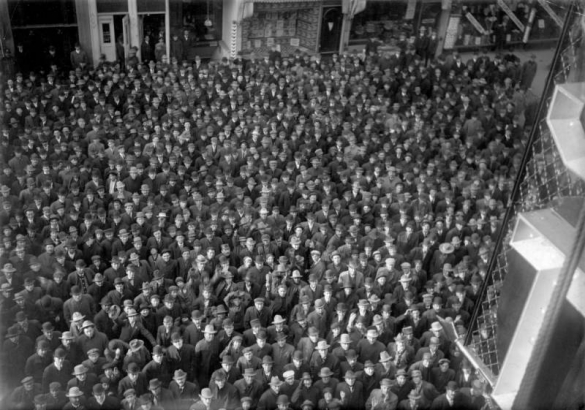 It would be fair to say that residents of Denver and the state of Colorado are, and have always been, extremely rabid sports fans. Denverites also like enjoying sports in large groups.

This fact was proven once again last year when hundreds of thousands of people gathered at Civic Center Park to celebrate the Denver Broncos' 24-10 victory over the Carolina Panthers. It was also proven between 1920-1940, when this photo of several hundred men listening to a broadcast of a boxing match on Champa Street was taken.

We don't have much information about the photo, but we can surmise a few things. For starters, given the number of derby hats on display, this photo was likely taken closer to 1920 than 1940. Thanks to the really top notch zoom feature on our Digital Collections, we can also get a very close-up look at a crowd that's comprised almost entirely of men and boys. (There may be a woman or two in the mix, but we sure couldn't find them.)

At first glance the crowd doesn't seem to be particularly diverse but, once again, a zoom-in reveals some interesting details. Besides a large number of men who appear to be of Central European or British origin, there are a number of African-Americans and a number of other Eastern Europeans or Italians in the crowd. Conspicuously absent are Hispanics and those of Asian ancestry.

No matter where they hailed from originally, every man in this photo, except one, is either wearing a hat or has one in his hand.

When Denverites gather to celebrate sporting events today, the crowd is considerably more diverse (women are welcome!) and hats are no longer mandatory.

It's interesting to compare the dress of fans in this and other photos of 50+ years ago to the fans of today. Fans today are dressed a lot more casual.

Definitely. Back in those days, a man simply didn't leave the house without a hat on his head. Thanks for commenting!

I love hats.(not a cap) Caps seem to have won out over hats in our time. But to me a fine hat on a gent means he knows style. And knows of a different age when going out on the town meant looking his best.

My mom's family lived in a semi-rural area but in the 30s and 40s when they went into town to the nearest "city" (population probably about 3000) on weekends my grandfather always wore his three-piece suit and a hat. People now dress pretty sloppily. I'm as guilty of it as anyone. I watch old 40s movies and marvel at the mens' haircuts and all the "hair tonic", i.e. grease, they used. I always wonder what that did to their fine hats.

All that hair tonic seemed to have won the War on Hat Head! I'd look like a disaster if I wore a fedora every day! Thanks for commenting and reading.

Wow! What amazes me is how peaceful they seem, and how they don't seem to mind the lack of personal space. And no phones!! Great post, thank you.