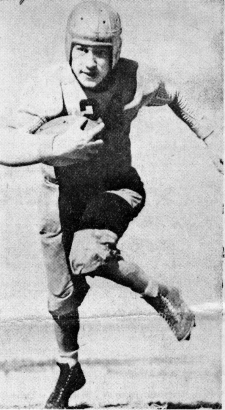 This week, the University of Colorado Boulder football team found itself nationally ranked for the first time in over a decade. It's a big deal for Buffs fans, but it's certainly not the first time we've seen a Buffalo break out and grab a spot on the national stage. That's where this photo of Byron "Whizzer" White and former Colorado Governor Edwin C. Johnson come into the picture.

Though longtime Buffs fans probably don't remember seeing Byron "Whizzer" White on the field, most of them at least know his story.

White grew up in the small town of Wellington, CO, just outside of Fort Collins, where he finished at the top of his class of six students in 1934. He took full advantage of a scholarship that was available to valedictorians across the state to attend the University of Colorado Boulder.

During his time at CU, White distinguished himself as a top notch student and athlete and helped lead the team to an 8-0 season in 1937 (thought the team did lose to Rice in the Cotton Bowl on New Year's Day, 1938). White also played on the CU basketball team that played in the National Invitational Tournament (the precursor to the NCAA Tournament).

After graduating from CU, White distinguished himself as a player in the NFL on the Pittsburgh Pirates (now the Pittsburgh Steelers) and as a Rhodes Scholar at Oxford. With Europe baking squarely in the caldron of war, White headed home to attend law school at Yale and play a few more seasons in the NFL. (And as one of the highest paid players in the league, pro football turned out to be a pretty good part-time gig for the young scholar.)

During the War, both White and his wife, Marion, served honorably in the Navy. After the War, White worked at a Denver law firm that specialized in business law. In 1960, White campaigned for John F. Kennedy and served in his administration as the United States Deputy Attorney General.

JFK nominated White to fill a vacancy on the Supreme Court in 1962 when he was just 44 years old. White served in that position until 1993, making him the fourth-longest serving Justice ever.

Sadly, Whizzer passed away in 2002 at the age of 84, but his legacy lives on in the many court opinions he offered and, of course, the Whizzer White Grill on the CU campus.

At one time the NIT was more important than the NCAA Men's Basketball Tournament. According to Wikipedia early in their history-teams could play in both tourneys in the same year.

Hi WRT! Thanks for sharing that with us. As a long time CU fan, I'm happy to see them go to either tournament...both in one year might have induced health problems!

This photo is of CSU graduate Glenn Morris being honored on Glenn Morris Day in Denver after he won the 1936 Olympic Gold Medal for the decathlon. It must be mis-labeled. This was taken around September of 1936.

Hi John - Thank you for spotting that! You are absolutely correct. That picture looks like Byron White only until you see a picture of the actual Byron White, at which point the mistake is clear. Thanks for point that out and thanks for reading!