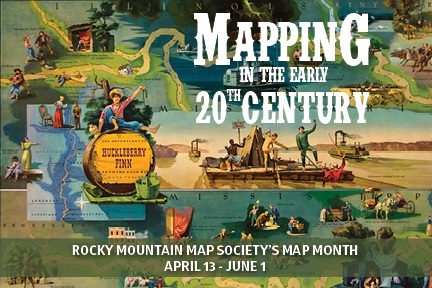 Come celebrate Map Month with the Rocky Mountain Map Society and the Denver Public Library as we present a series of exhibits and lectures focusing on 20th Century maps.

On display will be multiple examples of the better graphics, color and creative presentations that became popular amongst map printers starting in the 1900s, with a special focus on Colorado maps, including those from the Clason Map Company.

During the 1920s a new style of map that broke the bonds of traditional cartography took hold across the US. Pictorial Maps, as they were known, were mostly used for tourism, commercial advertising, or to illustrate the news. Drawn from the private collection of Wesley Brown, this exhibit follows the innovative style of pictorial mapping form the 1920s - 1980s.

A Luddite's View of the History of Cartography

The 20th Century marked a transformative period in the history of cartography, whose innovations included Industrial Revolution-era printing technologies and the dawn of digital map making. Dr. Ackerman will be drawing on a wide range of maps to ask whether the 20th Century's technological, professional, and social developments truly transformed map making and map use. And if they did, was that really such a good thing?

How an Artist Reinvented the Map

World War II brought the world of maps and map making into direct contact with more Americans than had ever seen or cared about maps up to that point. From publications like National Geographic to the tactical maps that were a mainstay of daily newspapers of the time, maps were everywhere. One of the most important innovators in this cartographic frenzy was artist Richard Edes Harrison. Harrison's work not only captivated the public, it fundamentally changed the nature of geography forever.

Pictorial Maps: A History and Overview

Pictorial maps are often viewed as merely colorful, whimsical objects, but their cultural subtext goes much deeper than mere graphics. In this lecture, Curtis Bird will show how various streams of pictorial maps spoke volumes about the era's life, culture and defining perspectives.

Promotional Cartographies: the Clason Map Company and the American West 1903-1931

George Clason was a Denver-based map publisher who helmed the largest commercial map company west of Chicago between 1903-1931. Clason's multitude of road; state; city; mining; and promotional maps not only boosted his personal fortunes, they elevated the entire region. In this presentation, Bill Wyckoff examines Clason's relationships with private and public companies and how he communicated enduring ideas about the West's economic potential and regional character.

Local map dealers will be on hand with selections of their inventory on display and available for purchase.

A customer asked me for a gazetteer today. What a coincidence!