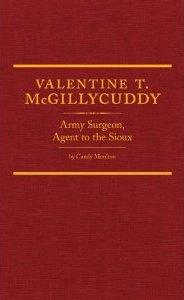 The Western History/Genealogy Department is pleased to announce the winner of its prestigious Caroline Bancroft History Prize. Two honor books were also named. The Department presents the Caroline Bancroft Prize annually. According to the terms of the will of the late Caroline Bancroft, provision is made for an annual prize to be awarded to the author of the best book on Colorado or Western American History published during the current year, to be known as the Caroline Bancroft History Prize. During the past year, a committee of eight volunteers from the Western History/Genealogy Department considered approximately thirty books submitted by publishers before selecting the winner and the honor books The winner of this year's prize is Valentine T. McGillycuddy: Army Surgeon, Agent to the Sioux, by Candy Moulton, published by Arthur C. Clark Company - University of Oklahoma Press. Two runner up submissions were named at honor books in this year's balloting. They are: Prairie Fire: A Great Plains History, by Julie Courtwright, published by University Press of Kansas and In Pursuit of Gold: Chinese Miners and Merchants in the American West, by Sue Fawn Chung, published by University of Illinois Press. Congratulations to all three authors and publishers for making these wonderful works available to the Bancroft committee for consideration.