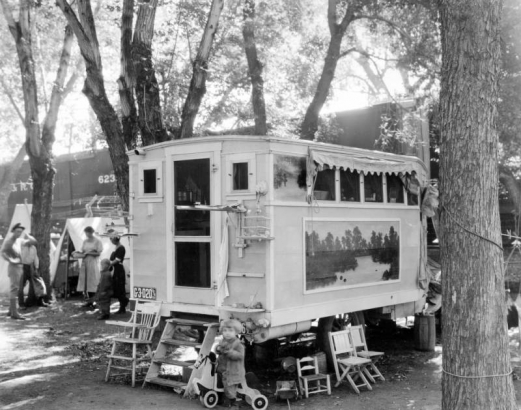 Every summer the City of Denver is inundated with tourists streaming into the city from all over the world, while residents of the City of Denver head towards the mountains for camping and other outdoor recreation. For a brief time during the 1920s and 1930s, however, tourists and locals could enjoy camping and outdoor recreation in the heart of the Mile High City at the Overland Motor Park.

Located at what is now just Overland Park (W. Jewell Ave. and S. Delaware St.), the motor park was opened in 1922 on the site of the old Overland Park race track and was quite an operation. Overland Park covered around 160 acres and offered a host of amenities ranging from a soda fountain, grocery store, laundry room, pool tables, and a filling station. Even better, these services were available free of charge to folks who were camping in tents. (Do we need to mention that this would certainly not be the case today?)

Of course automobiles were the stars of the show at Overland Park and campers who brought trailers and recreational vehicles like the one pictured above were the dominant feature. Motor-drawn campers also paid fees that were poured back into the park for additional amenities like a massive three-story clubhouse.

Despite its popularity, Overland Park's tenure as a camping destination was relatively short-lived. In the early 1930s the motor park was shut down, and by 1932 it was re-opened as a nine-hole golf course. In the late 1950s it was expanded to 18-holes and was nearly lost completely during the 1965 flood.

Just to show that everything old really can be new again, Overland Park will host thousands of visitors, including some campers, for a large music festival in September 2018. That event is expected to draw as many as 60,000 people for several days of concerts on the golf course. (Festival organizers have included repairs to the course in their payments to the city.)

Though the festival looks to be a good time, it's unlikely it will be able to compete with the simple charm of pulling up a homemade trailer to camp and enjoying the natural beauty of southwest Denver.