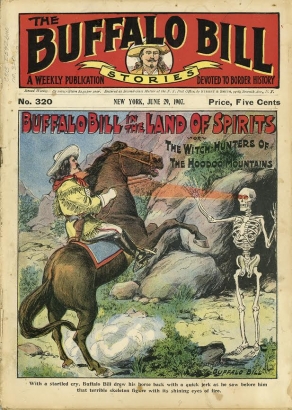 America’s first superhero was not Superman or Batman, but the scout and showman Buffalo Bill Cody. The real man, whose Wild West show made him an international superstar in the late 19th century, was also a character featured in nearly 2,000 dime novels and comic books.

The dime novel, as it is commonly known, was the predecessor to the comic book or graphic novel, popular with modern audiences today. This pulp format usually referred to formulaic, popular fiction, with easily reproduced storylines. And Buffalo Bill Cody was the king of the genre.

While the dime novel eventually fell out of favor with fans of popular fiction, Cody, however, did not fade from the limelight. As a character, Buffalo Bill easily made the transition to comic books. In this genre, Bill was featured in his own series and had numerous guest appearances in multiple titles. Today, the Western survives in the comic book format, and the superhero genre, pioneered by Buffalo Bill, is more popular than ever.

Stop by the Gates Reading Room on the 5th Floor of the Central Library until December 31, 2017, to see the full exhibit!

When and where is the exhibit?

Hi Karan, Thanks for the question! We've updated the blog with all the details.

I love that you are displaying Buffalo Bill and acknowledge he was one of the first "super-heroes!"

If you think you might be interested in purchasing more related items...along with some donations ...please get back to me. Thank you....Joseph Rainone.