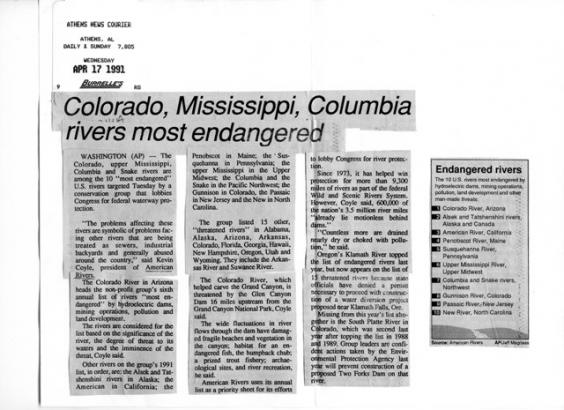 In 1973, thirty-three river enthusiasts met in Denver, Colorado, where they founded the American Rivers Conservation Council (now known as American Rivers). Since that time, American Rivers has worked  to preserve many rivers in their free flowing conditions. They advocate the inclusion of rivers on the Congressionally-designated Wild and Scenic Rivers list, promote dam removal, fight water pollution, and promote awareness of the importance of our waterways. Their annual America’s Most Endangered Rivers list frequently includes rivers from Colorado and the West (the 2012 list includes Colorado’s Crystal River). The American Rivers Collection includes correspondence, press releases, newspaper clippings, reports, and meeting minutes from American Rivers and other conservation organizations from 1968-2000. This collection is open to both researchers and the general public, and is one of over one hundred collections that comprise Western History and Genealogy’s Conservation Collection. You might also want to visit the American Rivers website.