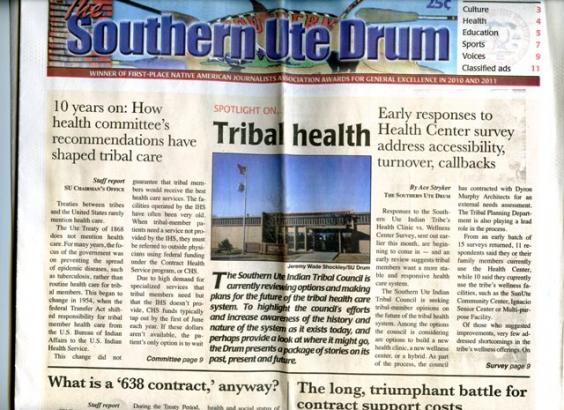 American Indian newspapers help American Indians keep abreast of tribal news across reservations both large and small. Tribal newspapers report on national news of importance to American Indians, such as the recent appointment of Sally Jewell as Secretary of the Interior. They report on local news, such as tribal government, American Indian health, and local basketball and baseball teams. These newspapers also perform a role in promoting American Indian cultures, with articles and advertisements for powwows, art fairs, and other community gatherings. The Southern Ute Drum even has a section called This is Your Language (‘icha-‘ara muni ‘apaghapi ‘ura-‘ay) that gives a short lesson in the Ute language. Finally, these papers provide the time honored job of posting job openings, building permit applications, and other mundane but necessary information that keeps the world moving. Although some critics, including some American Indian journalists, have alleged that those tribal papers controlled by tribal councils censor journalists who are critical of Indian governments, most would probably agree that tribal newspapers help foster a sense of community for Dineh, Lakota Sioux, and other peoples, by providing them with their own cultural mouthpieces. In addition, papers such as the Southern Ute Drum, Lakota Country Times, the Navajo Times, the Teton Times (newspaper of the Standing Rock Sioux Tribe), News from Indian Country, and This Week from Indian Country (magazine) help the many American Indians who do not live on reservations, including many in Denver, keep tabs on their peoples. To read the above newspapers and other ethnic newspapers, come to the Western History and Genealogy Department on the Fifth Floor of the Central Library.

You fail to list the Native Sun News, the largest Indian-owned newspaper in the Northern Plains. Also, the Lakota Times (Not Lakota Country Times) was the predecessor of Indian Country Today.
Hi Tim, It looks like Noel used examples of papers that we have here in our collection rather than an extensive list of publications. Thanks so much for sharing the other titles with us and readers!