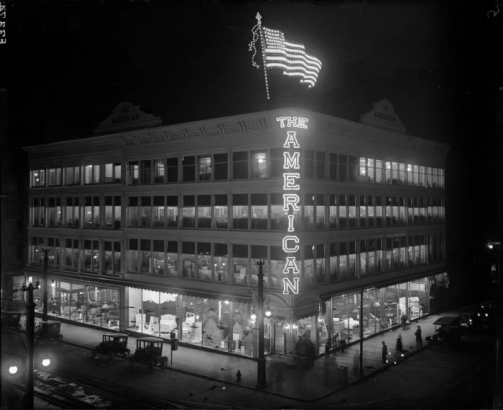 The location that's pictured in this wonderful photo is 1601 Lawrence, sometime around 1920 (and it's just one of many lovely nighttime photos of Downtown Denver in our Digital Collections).

The American Furniture Company was founded in 1898 by Samuel F. Cohn, a Russian immigrant who worked (and lived) in Larimer Street restaurants until he saved up $1,000 to finance his dream.

During its nearly 100-year run, the American Furniture Company distinguished itself as a somewhat progressive retailer, especially when it came to how it treated its employees. In 1950, the store became one of the first retailers west of the Mississippi to offer its employees a five-day workweek.

To accommodate the switch, American added 15 employees and everyone worked 9 a.m.- 5:30 p.m. on a rotating schedule that allowed the store to remain open on Saturdays, but stay closed on Sundays. Prior to the change, male employees worked 45 hours over six days while females worked 43 hours.

Cohn's heirs didn't have quite the passion for value furniture as Samuel and sold the firm off to the American Investment Co. (AIC) in 1967. In January of 1974, AIC sold out to a group of six American Furniture employees. Unfortunately, the owner employees just couldn't make a go of it, and by October, they were hosting their own going-out-of-business sale.

That's a sad end to an epic run, but retail workers in Colorado can thank the company for its embrace of employee-friendly policies, like the five-day workweek.

Enjoyed your post, Brian--I would add that furniture made back in the day (really anything constructed prior to 1974) gave much longer/greater value than most of the furniture made today...for example, back in 1955, my grandmother bought a bed that included an attached mattress from American Furniture for $100 and it lasted (remaining very comfortable the entire time!) until my mom gave it away to a Denver shelter in 2012. Still miss that comfy bed & the American Furniture Store!

Thanks for the kind words, Leigh Ann! It sounds like American Furniture treated their customers as well they treated their employees!