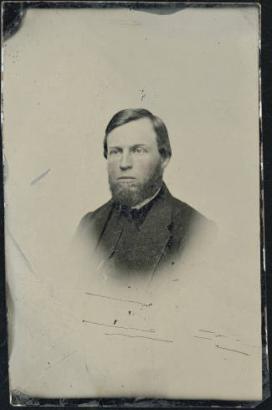 The first issue of the Rocky Mountain News was published April 23, 1859—mere days after the paper’s founder, William Newton Byers (1831-1905), arrived in Denver.
Byers wrote most of the first issue’s stories while living in Nebraska. Articles included “Farming vs. Gold Digging,” “The World Without a Sabbath” and a “Map of the Gold Region, with Routes Thereto.” Printing equipment, which Byers purchased from a defunct Nebraska newspaper, was moved by oxen to Denver.
Preserved in the Denver Public Library’s Western History/Genealogy Department is the very first copy of the Rocky Mountain News. A press time certification reads: “…the first sheet ever printed in the Pike’s Peak Country at 10pm, April 22d, 1859.”
The final issue of the Rocky Mountain News appeared on newsstands February 27, 2009. The Western History/Genealogy Department holds a final certified copy of the issue and the printing plate from its first and last pages.
Did you know that DPL’s Western History/Genealogy Department has been designated the repository of the Rocky Mountain News archives? This collection is the Department’s largest and contains over 500 boxes of photographic prints, over 1,000 boxes of newspaper clippings, and 350,000 born-digital images. Click here to learn more about this collection.

I just watched a rerun on Death Valley Days television series. It was about the story of the origination of The Rocky Mountain News newspaper. It was titled “The Race at Cherry Creek “.